The overseas market price is higher than the RMB market 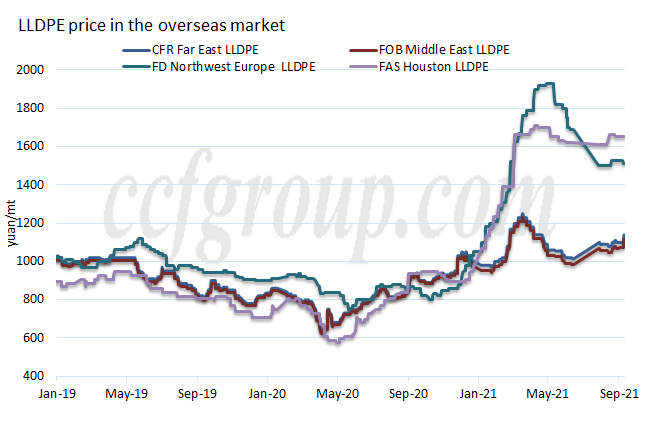 Taking LLDPE as an example, by comparing the prices of the Far East (which can replace Chinese prices), the Middle East, Northwest Europe and Houston, it can be clearly found that the prices in the Far East are much lower than those in Northwest Europe and Houston. It can be said that the prices in overseas regions (especially in Europe and the United States), the price is much higher than those in China, so most of the sources of goods from the Middle East, Southeast Asia and America are given priority to Europe and the United States, and then supply to China would be considered. In addition, more and more new plants in China have started up and the production capacity increased, squeezing out part of the imported goods.

The cost is high, and price spread between RMB market and PE CFR China market is large.

Although the current China domestic prices are lower than those in Europe and the United States, however, for China, suppliers publish their new offers at high price each week, and thus the price spread between RMB market and PE CFR China market was large. Taking LLDPE as an example, as shown in the above chart, LLDPE price in PE CFR China market is continuously higher than that of RMB market, and the price spread is fluctuating around 200-800yuan/mt. Even if the current price spread is around 400yuan/mt, the range has been expanded due to the gradual increase in the price of suppliers’new offers. Under such situation, downstream buyers prefer to purchase yuan-denominated materials and get the tax refunded. Although traders intend to sell USD-denominated materials, market transaction is thin.

The import volume has dropped sharply, and the import supply is tight.

On the whole, with the continuous increase of domestic production capacity in China, there is still an obvious squeeze on the source of imported goods. In addition, the overseas market price continues to be higher than that of China, the suppliers’supply to China has shrunk. For China domestic first-hand traders, high costs (whether raw material costs or sea freight) is always difficult to operate, and the buying interest is weak. Moreover, for downstream, buyers prefer to purchase yuan-denominated materials and get the tax refunded, and buying intention for the USD-denominated materials is bearish. Overall, PE CFR China market will continue to strengthen.